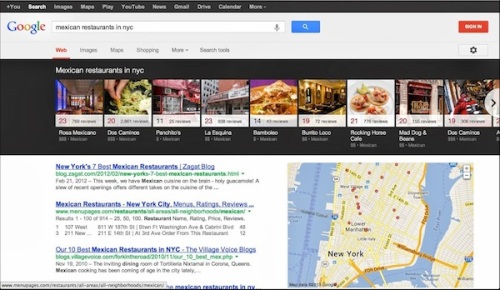 The Google Local Carousel beta test that we saw last month is now rolling out to all U.S. users, Google announced. While the carousel has been used on tablet devices since December 2012, the carousel style results being available on a desktop is a much newer change.

With the new style of carousel listings, when a user searches for a local results, such as a restaurant or hotel, instead of the traditional vertical listings most users associate with Google search, there is now a horizontal carousel which features thumbnails, ratings, as well as the number of Google+ reviews. Users can then scroll sideways through the listings to see more results.

One of the positive things to this new carousel style for local results is that businesses who might not rank in the top two or three required to see the results above the fold, can now see their business featured very prominently, complete with an image. However, there is no guarantee that your business will be one of the ones chosen to show in the carousel. Google search ranking algorithms also apply to the listings in Google Maps in determining which businesses are featured in the carousel.

This will also mean it is that much more important for a local business to ensure that the thumbnail used for their local business listing is one that not only represents their business, but is eye-catching enough to draw searchers to their listing. Interestingly, Google’s algorithms will also decide which photo is used, although exactly what algorithms are used as unknown at this time, but they do suggest using high quality images on your Google business listing.

Google’s local carousel is only available in limited verticals at this time, with hotels, restaurants, and bars being amongst the verticals included. They do say that they are looking to expand this by experimenting with different designs and interfaces.

This is currently being rolled out in the U.S. only at this time and is only available in English.