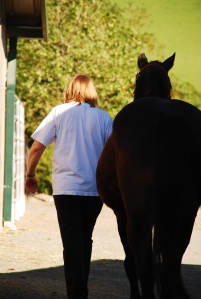 Recently I had the opportunity to photograph my cousins beautiful champion quarter horse Rodney.

Rodney is a registered AQHA, American Quarter Horse. He was born in San Martin, CA on March 11, 1982, at Tinker Stables. His registered name is Docs Skippin Tivio yet received his barn name[nickname] of Hotrod or Rodney because the first choice name Tivios Hotrod was already taken.

Deanna is second owner to Rodney, she bought him directly from the breeder when he was four years old and still a stallion. He is of the bloodlines that were known as the Empire of Cutting, in the late 70’s and through the 80’s that is the Doc Bar and Poco Tivio legacy. Rodney is the grandson to Doc’s Peper Bar and Poco Tivio. There is longevity in his bloodlines, Doc Bar lived to be 36. Rodney was started by John Ward and then trained by Billy Cochrane.

Rodney has showed in the Snaffle Bit Futurity, the Oregon Futurity and many weekend cutting events. Rod has been happy and healthy all his life and is probably the most athletic horse I have ever ridden. He has spent his life loving to work and always wanting to please; I have never had to get after him, he has been tried and true. We formed a great partnership in the show pen. He loves to work cattle. After he retired we did sporting events locally, he was a favorite with the other competitors. I was offered a lot of money for him several times but politely declined, as he was my friend and life mate as a horse.

He has done a number of interesting things in his career, he was the half time show at Dressage in the Wine country, paired along an Oldenburg Stallion that he was the mini shadow to. Rodney does the same moves as in dressage but in the western genre. He also spent time on the Racetrack as a pony horse. Rodney also won a lap and tap race as part of a four horse team, along side of some quarter horses off the track. He was lightening fast, Doc Bar was originally bred to race. Rodney has personality plus, he comes running to a specific whistle. He also knows voice commands, and is very sensitive to leg pressure and ques when ridden. He is like driving a high performance race car. He has a funny passion for smell, he like to smell ladies long hair…..he also loved to gently smell Nick when he was an infant….funny horse. Rodney will go down in history as the best horse I will ever own. ~D 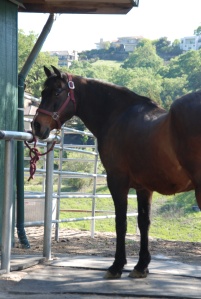 New to The Daily Post? Whether you’re a beginner or a professional, you’re invited to get involved in our Weekly Photo Challenge to help you meet your blogging goals and give you another way to take part in Post a Day / Post a Week. Everyone is welcome to participate, even if your blog isn’t about photography. Here’s how it works: 1. Each week, we’ll provide a theme for creative inspiration. You take photographs based on your interpretation of the theme, and post them on your blog anytime before the following Friday when the next photo theme will be announced. 2. To make it easy for others to check out your photos, title your blog post “Weekly Photo Challenge: (theme of the week)” and be sure to use the “postaday″ tag.  3. Subscribe to The Daily Post so that you don’t miss out on weekly challenge announcements. Sign up via the email subscription link in the sidebar or RSS

6 Comments to “Weekly Photo Challenge: Together”